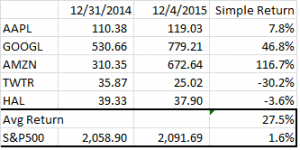 As of 12/4/2015, the S&P 500 (SPY) is up 1.99%. It’s been a volatile year as there was a sharp correction in August that has since been recouped.  Trading has been been focused on the Fed rate outlook and China’s slowdown.  Commodities have been crushed as oil is down about 40% this year. Large growth stocks were the place to invest as my picks benefited from huge gains in AMZN and GOOGL.  Growth stocks (IWF) were up 6.88% and value stocks (IWD) were down 3.53% for a 10.41% difference.  For 2016, I still like GARP names as the broad market searches to find earnings growth.

I continue to like Apple (AAPL), as this name is broadly misunderstood and undervalued.  At $660B, it’s the world’s largest company and many investors are concerned about the dependency on smartphones and ability to grow as such a large company.  As they leverage their ecosystem and introduce new products and services, they can still grow users and ARPU faster than investors think.  Ultimately, they can grow earnings 13-15% over the next 3 years.  At less than 10PE (ex-cash), this is very undervalued.  Even the company is buying tons of shares with $70B FCF/year and $200B of cash on the balance sheet.  This will be a trillion company within 3 years.

Twitter (TWTR) still has a bright future despite the near-term problems.  MAUs have slowed dramatically and this has been hurting the stock.  With 300M users, they are growing sales at 40% and meeting their recent internal goals.  Under new management, I believe they will eventually figure a way to monetize their customer base and grow MAUs with new services.  It’s an amazing and unique platform that is tough to replace. It’s a place for “breaking news” and “where world leaders communicate”.  From the lessons of David Gardner of Motley Fool, I believe Twitter passes a very important test, “would people notice if the product or service did not exist”.  Many certainly would.  Dorsey has a lot of work ahead of him but I believe this $17B company will grow 2-4x.  A secondary consideration is Google could buy TWTR as the stock has come down more than 60% from its high and gives them the social media audience they missed with Google+. As long-term thinkers, Google could see the potential long-term value in Twitter’s product.

Celgene (CELG) is a fast growing, $86B biotechnology company with a great product portfolio, partnerships, and solid pipeline. Sales growth over the last 5 years has averaged 20%+/yr.  As we enter an era of biotech breakthroughs, Celgene should continue to be a market leader, especially in cancer therapies.  The stock is 20% off it’s recent high as biotechnology sold off late in the year due to drug pricing concerns.  In the next 3 years, sales and earnings could double. At 22x 20015E, CELG trades at a nice discount to it’s peers, BMY and LLY.

With restaurant stocks tough year, I thought there would be some overlooked spots.  Popeye’s Chicken (PLKI) has been one of the best growth stories in quick-service restaurant industry. They have a strong management team, great business model, and with 2500 restaurants, they have a lot of growth potential domestically and internationally (KFC has 5,000+ in total).   This $1.3B company will be a lot larger 3-5 years from now.

Carmax (KMX) is the largest used car dealer in the US.  They provide haggle-free pricing, huge inventory, and large, clean show rooms.  They help car buyers get more car for their money in a comfortable environment.  Over the last decade, earnings have grown nearly 20%/year.  The stock has fallen 20% from it’s recent high due to a slower same store sales, mostly due to lower average selling prices.  I think this is a temporary slowdown and they have a proven retail concept in a huge addressable market. Carmax has 5% market share of used vehicles up to 10 years old in the United States.  This $12B company has plenty of room for growth ahead.

I’m a long-time shareholder of Apple and use their products (Iphone, Ipad, Apple Watch, Apple TV, I-tunes). The stock has done extremely well over the years and I believe there is plenty of upside in 2016.  The stock trades at $117.18 (12/2/2015) and has a PE of 11 (2016E of $10.01). It has an expected growth of 12%. The financial position is excellent with nearly $200B in cash and has $70B of FCF annually. The market is currently trading at 16x earnings and will not grow nearly as fast. It is a misunderstood company as investors and analysts underestimate the ecosystem and value the company as a hardware company instead of a services one. By 2018, Apple could earn $13 (growing at 14%), a 15x multiple discounting back (10%) puts the stock at $160. I think product innovation in the TV space and autos give the company a bright future.